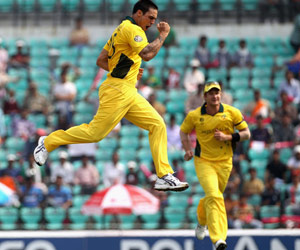 NAGPUR: A gutsy-half century from Nathan McCullum guided New Zealand to 206 against Australia in a World Cup Group A match here Friday.

Nathan (52) and captain Daniel Vettori (44) added a valuable 54 runs for the eighth wicket that helped New Zealand recover from a precarious 73 for six on a damp wicket at the Vidarbha Cricket Association (VCA) Stadium in Jamtha here. Once the partnership was broken, New Zealand folded up quickly in in 45.1 overs.

Heavy overnight rain prompted Australian captain Ricky Ponting to field and his fast bowlers made the dents with a wayward Shaun Tait and Mitchell Johnson sharing seven wickets between them. Tait had figures of three for 35 from seven overs while Johnson ended with four for 33 from 9.1 overs.

Though there was not a great deal of movement, the New Zealand batsmen failed to apply themselves on the moist pitch and only had themselves to blame for playing rash strokes.

Pace spearhead Brett Lee opened with a maiden, but his new ball partner Tait gave away nine runs in the second over, including a four by Brendon McCullum (16).

In his next over, Tait again found himself at the receiving end of Brendon’s fury with two crisply-timed fours, but the wicketkeeper-batsman mistimed the fourth ball and holed out to Jason Krejza at the third-man boundary.

Opener Martin Guptil crawled to 10 before being bowled out by Shane Watson and double strikes from Johnson in the 14th over removed Jesse Ryder (25) and James Franklin in a space of three deliveries.

Ryder, who struck six fours, hardly moved his feet during his 31-ball knock and edged Johnson to wicketkeeper Brad Haddin. Franklin, who was promoted up the order, departed in a similar way chasing a wide delivery.

Veteran Scott Styris went for a wide slash off Tait and edged to Haddin while Ross Taylor’s (7) stumps were rattled by a fast in-swinging yorker from Tait.

Nathan and Jamie How (22) then added 48-runs for the seventh wicket that helped New Zealand cross the 100-run mark. Nathan struck three fours in his 76-ball stay while Vettori hit five fours during his valuable 43-ball knock.