The most awaited film of the season Allu Arjun’s Badrinath is gearing up for its release with huge number of prints on 10th June in Telugu, Tamil and Malayalam versions simultaneously. The makers are publicizing the film on a large scale. The trailers of the film are already being screened in 1000 theaters across AP. 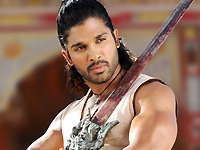 Allu Aravind has produced the film with a whopping budget of 40 crores on Geetha Arts banner. The entire movie is said to have 22 huge lavish sets, which are erected under the supervision of art director Anand Sai. Om Kareswari.. song penned by Veturi Sundaramurthy is said to be shot in a lavish set worth 3 crores.

Badrinath is an action packed mass entertainer directed by V V Vinayak, which has Tamannah as the leading lady. Keeravani has scored the music. With many such highlights, expectations on Badrinath are reaching peaks.