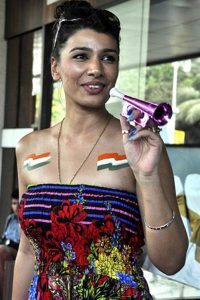 This is what they had to say on social networking site Twitter:

Shilpa Shetty: INDIA WON..n I cried!:)tears of joy!Class act by the Indian team, aggression with maturity, lethal combo! Deserve 2 b in the Finals, fab job (sic)

Rahul Bose: Done! And dusted! The battle of the captains is decided beyond doubt!

Anupam Kher: Congratulations!! Even in London we can hear joyous & excited sounds of VICTORY. It was nice to see Sonia Gandhi minus her composure.

Priyanka Chopra: Oh my god! What a show of class Team India! The world cup awaits you in Mumbai! Can you hear the unified sound of pure joy… Indiiiiiiiaaaa!

Genelia D’Souza: For all d criticism Dhoni got for his intial decision, I think it is time we all give him his due..Raina was fabbb and my favourite for today today,Team INDIA take a bow

R. Madhavan: The BEST part was 2 see the camaraderie and mutual respect between the 2 teams- Not long B4 the two nations feel the same. God willing.

Neil Nitin Mukesh: What a win! What a match!