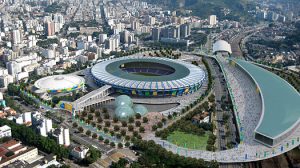 After the World Cup overcame fears about protests, half-finished stadiums and chaotic transport to deliver an exciting tournament, next up for Brazil is 2016 Olympics, which poses an even bigger challenge.

Brazil just pulled off the World Cup. Next up is Rio de Janeiro’s 2016 Olympics, which poses an even bigger challenge.

Cement trucks are busy, creating billowing dust clouds, and girders are rising along Avenida Embaixador Abelardo Bueno, the road running in front of the main Olympic Park in the suburb of Barra da Tijuca.

“It’s going, it’s going,” said a worker at the construction site, wearing an orange helmet, blue overalls and introducing himself as Mauricio Lima.

Rust-orange beams sprouted behind him as he talked, a superstructure that in two years will become the Olympic media and broadcast centers.

“There is a lot to do, but things are moving,” he added.

The World Cup overcame fears about protests, half-finished stadiums and chaotic transport to deliver an exciting tournament that culminated with Germany’s 1-0 victory over Argentina in extra time in the final.

Brazil’s humiliating 7-1 loss against Germany in the semifinals was a blow to the home country, and the collapse a week ago of an overpass – part of a World Cup project in the southeast city of Belo Horizonte – killed two people. Eight workers died in World Cup stadium construction accidents.

Rio’s Olympics have had their own problems.

A few months ago, International Olympic Committee Vice President John Coates called the city’s preparations the “worst” in memory. Other IOC members openly lambasted Rio. In response, the IOC sent in executive director Gilbert Felli to work as a troubleshooter.

His presence has helped, and Felli expects most projects back on schedule by September. (Brazil Declares Victory in Hosting World Cup)

“I’d like to be clear,” Felli said in an interview with The Associated Press. “Until the games are delivered I’m always concerned. But it’s not the case to say we’re not going to make it. It’s not possible that we won’t make it.”

Felli believes the World Cup gave the Olympics a boost.

“The perception of the Brazilians is much more positive,” Felli said. “It’s good for the games. They have better trust in themselves to deliver the games. My view is to say … the Brazilians will deliver excellent games. But we have to work every day for it. Nothing is a done deal.”

Deadlines are still tight, and Felli described some as “tense, very tense.” The problem areas include:

-a shortage of hotel rooms

-severe water pollution at the sailing venue in Guanabara Bay

-completion of a subway line extension from central Rio to Barra da Tijuca, site of the Olympic Park

-construction of a public golf course several kilometers (miles) from the Olympic Park.

The Rio Games, with events scattered around four venue clusters, could present transportation nightmares in a city cut up by mountains, tunnels and poor roads. About 60 percent of the events will be at Olympic Park, about 25 kilometers (15 miles) west of central Rio. (FIFA World Cup 2014 in Numbers)

The Olympic Park and nearby golf course are being built in a wetlands/swamp area. Small alligators have been spotted wandering around the golf course, and visitors constantly complain about swarming mosquitoes in the Olympic Park area and the neighboring athletes village.

Other events will be staged at three other clusters: Deodoro; the famous Maracana Stadium area in central Rio; the Copacabana Beach and Guanabara Bay areas.

Track and field will be run at the Joao Havelange Olympic Stadium, which was built in 2007 for the Pan American Games. The stadium, located in the Maracana cluster area, has been closed for a year for renovation and is to open next year.

In the wake of the World Cup, former IOC marketing director Michael Payne warned against complacency.

“The danger would be anybody having a false sense of security,” Payne said. “The Olympics are a far more complicated undertaking to deliver than the World Cup.”

-The World Cup is one championship; the Olympics are dozens.

-The World Cup drags on for a month; the Olympics are densely packed into just over two weeks.

-Host-generated broadcasting for the World Cup amounted to a few hundred hours; the Rio Olympics will generate about 5,000 hours.

Payne suggested Rio’s Olympic preparations might have “bottomed out” a few months ago, which means the only way is up.

“No disrespect to FIFA and the complexity and what they’ve done,” Payne said. “But the sheer number of events becomes intimidating in the Olympics. It’s a danger if Brazilians think it’s just a bit more complex.”

Brazil is estimated to have spent $11 billion to 14 billion on the World Cup, mostly public money. About $4 billion went to building or refurbishing 12 stadiums.

Olympic spending is about $17 billion – a mix of public and private money. Rio Mayor Eduardo Paes said he expects overall spending to increase by as much as 20 percent. That would put spending at over $20 billion.

In their winning bid in 2009, Rio officials pitched that the Olympics would be a catalyst for building infrastructure in Rio, a city neglected for 50 years.

But as costs have risen, and in an election year for President Dilma Rousseff, national, state and local officials have flip-flopped. Now they say infrastructure spending should be viewed separately from direct Olympic spending.

They argue that a subway extension, high-speed bus lanes and a rejuvenated port would have been built anyway and are not Olympic-related expenses.

However, Paes has acknowledged the projects lingered for years and would not have happened without the Olympics.

Dennis Coates, a sports economist at the University of Maryland-Baltimore County, warns against countries bidding for mega events like the Olympics or World Cup on the premise they will drive economic growth or spur building of roads and bridges.

“If you need highways and airports, you should be able to build them without throwing a big, expensive party for the rest of the world,” he said. “All that does is add to the cost. But if that’s the only way to convince the public that this is a good idea, than I guess that’s what you do. It’s sad but true.”