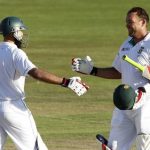 Centurion: The duo of Hashim Amla and Jaques Kallis kept the pressure on the Indian bowlers, not giving them any respite as they raced to their centuries with ease. Milking the deliveries for runs at will, even the second new ball of the day could not deter their run-scoring spree.

The incredible batting display saw South Africa reading 366/2 at stumps on Day 2 of the first Test.

Kallis slammed his 38th Test ton, his fastest ever to set India on back foot, he was quickly followed by Amla.

The first Proteas wicket fell in the form of Graeme Smith who was claimed by Harbhajan at a score of 62 runs. The last over before lunch provided some breathing space for the visitors as the scorecard read 111/1 at lunch on Day 2.

South African openers Smith and Petersen had got their team off to a solid start, avoiding any hiccups as they took the total past the 50-run mark in quick time. Smith slammed his 29th Test fifty, leading his team from the front.

A stark difference between the two approaches was that the Proteas looked more at ease in scoring runs rather than the hurry shown by the Indians that brought about ther fall in the day.
Every session saw the home team piling on the pressure against a tired looking Indian attack. The seamers were largely ineffective, with Sreesanth trying to bounce out the batsmen rather than sticking to his strengths – which is trying to swing the ball.

Harbhajan got the lone wicket in the post lunch session, but he was largely pedestrian.

Harbhajan was in action for a second time in the day as he got the second opener too. The badly needed wicket saw the back of Alviro Petersen after he had taken the Proteas past the 150-run mark, building on a lead for the already bamboozled Indian batsmen.

The post lunch session saw Petersen slamming a stylish fifty to avert any further hiccups in their superb start to the series.

India started off the second day of their first Test against South Africa at Centurion in continuation with the previous day’s woes as skipper MS Dhoni awarded Morne Morkel his fifth wicket without adding a single run to the scoreboard. The Indian innings was wrapped up at an embarrassing 136 runs to give Proteas the upper hand.

A nightmarish start to their numero uno Test status’ defence meant extreme hard work for the Indian bowlers who were already under pressure with Zaheer Khan’s hamstring injury on a wicket that would have seen him flourish the most.

None of the Indian batsmen could muster any resilience against the home team on the rain-marred first day as the fabled batting line-up of Gambhir (5), Sehwag (0), Dravid (14), Tendulkar (37), Laxman (7), Raina (1) and quirky Test surprise Harbhajan (27) were seen wanting in front of the South African pace battery of Morkel and Dale Steyn.