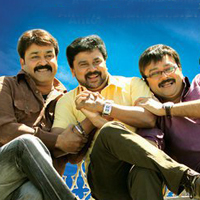 Rafi Mecartin’s ‘China Town’ would be released on the 14ht of April.

The film has a huge star cast, and has Mohanlal along with Jayaram and Dileep in the key roles. Kavya Madhavan and Poonam Bajwa are the heroines.

The film that is expected to be a laugh riot carries excellent preview reports. The final work of the film is being completed at Vismaya at Trivandrum.

The film would be a Max Lab Release.