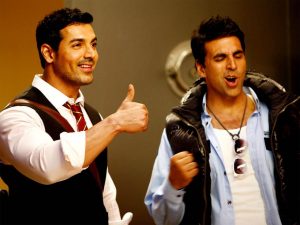 Akshay happy with the outcome of the film and the way Rohit Dhawan [son of director David Dhawan] shot it threw a lavish party to celebrate the completion of films schedule in London. The party took place at London’s one of the famous exclusive restaurant/ lounge-bar, Nobu last night.

Everyone from spot boy to the technical department of Desi Boyz was invited by Akshay Kumar and were taken care of by the Hera Pheri star.

Usually it is the producers who are associated with throwing bashes but off late the trend is changing; Amitabh Bachchan threw a bash to celebrate Aarakshan’s completion and as was the case with Imran Khan who did to his unit of Short Term Shaadi.

Apart from the films cast and crew the wrap-up party also witnessed Akshay’s good pals Farah Khan and Sajid Nadiadwala attending it. The party coincided with their work in London.

With actors throwing bashes producers will be certainly happy. A welcome trend.