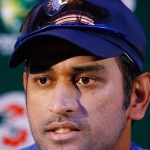 Dhoni, 29, inked a 6.5-million-dollar contract to be the face of Indian mobile phone company Maxx Mobile on Tuesday, four days after agreeing to a 5.7-million-dollar deal with Vijay Mallya’s United Breweries, officials said.

“Maxx believes in Dhoni’s potential, and the performance that he has delivered over the years is a testimony to his talent,” Maxx Group boss Ajay Agarwal was quoted as saying by the Press Trust of India.

While the Maxx deal is spread over seven years, the contract for the United Breweries group — who own Kingfisher airlines — is for three years, reports said.

A Forbes study last year on the world’s richest cricketers put him at the top with an annual earning of 10 million dollars, followed by Tendulkar at eight million dollars.

Under Dhoni, India became the top-ranked Test side last year and are now preparing for a major series against second-placed South Africa starting next week.