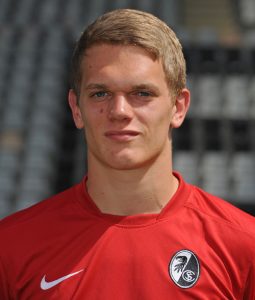 Ginter, part of the 2014 World Cup-winning team, agreed on a contract with eight-time German champions Borussia Dortmund until June 2019.

“Matthias has always been a strong and versatile German top talent. We are pleased and proud that he has decided for Dortmund.

The “BVB” starts in three competitions therefore we decided to start into the season with four strong defenders,” Dortmund`s director of sport Michael Zorc told the club`s official website.

The 20-year-old new arrival started his professional career in 2012 in Freiburg where he scored two goals in 70 appearances. The defender received the jersey number 28 at his new side.

“A childhood dream comes true for me. I was always a great BVB fan and now I can wear the jersey of my favourite team. I would like to take the next step in my sporting development with Dortmund.

I am already looking forward to the incredible atmosphere and to be part of this wonderful team,” Ginter said in a statement.

Juergen Klopp`s men completed the season in second place of the standings to qualify for the UEFA Champions League.