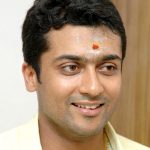 Reportedly A.R. Murugadoss’s next project with Suriya and Shruti Haasan, which has been titled Ezhaam Arivu (which means seventh sense), will leave for China in the first week of June for its first shooting schedule. The film is produced by Udhayanidhi Stalin under his Red Giants Production banner.
Ravi K. Chandran handles the camera and Harris Jayaraj will be the music director. There are also reports that star kid Shruti Haasan will sing all her songs in the film.