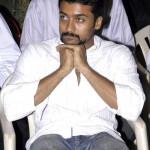 Kollywood’s most bankable hero Suriya’s new flick Ezham Arivu, directed by A.R. Murugadoss with Shruthi Haasan as the female lead, has started rolling in Chennai. The Chennai schedule will be followed by a 25 day schedule in China.
The Suriya-Murugadoss’ last combo was Ghajini, one of the best films in Suriya’s career. Notably, Ezham Arivu is Shruthi Haasan’s first Tamil film as a heroine.

Ravi K. Chandran is handling the cinematography and Anthony will handle editing. Harris Jayaraj has already completed composing the tunes with Na. Muthukumar penning the lyrics.

Rumoured to be a period film, Ezham Arivu is produced by Udhayanidhi Stalin of Red Giant Movies and is expected to hit screens by February 2011. This film will also be dubbed in Telugu.