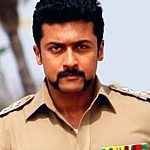 Surya’s latest film has exceeded expectations not just in India but also in the UK market. Singam is a roaring hit in Tamil and the film has said again distributor’s faith on Suriya. The actor has mastered the art of keeping both class and mass with him so well.
The UK Box office result for the week just ended is out and to the merry of all Surya fans his ‘Singam’ has topped among all the foreign films. Till last week ‘Singam’ has grossed over 8 million pounds in the UK market.
Singam ranked 41st on the charts and collected four thousand pound only in last week. So far the movie has collected over 80 lakhs in UK which is an achievement.