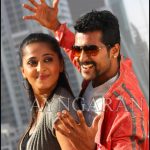 Suriya’s Singam directed by Hari is a big summer release.
Anushka shares the screen space with the actor.The film will taken on a worldwide release on May 28th..
Director Hari, who makes commercial mass masala films, is bringing out this big-budget action entertainer.
A complete action entertainer, this is Surya’s silver jubilee (25th) film.. Director Hari is at the helm of this project.. Racy screenplay and songs will be the crowd-pulling factor of the film and is sure to create waves..

Devisree Prasad has scored the music, while cinematography is by Priyan. Nasser, Prakash Raj, Radha Ravi, Manorama are in supporting roles..

The film will be playing at your favorite cineworld cinemas..