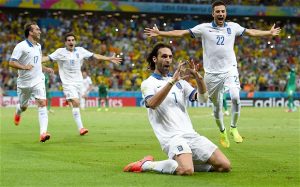 FORTALEZA: A last minute penalty by Georgios Samaras gave Greece a place in the second round of the World Cup finals for the first time after a 2-1 win over Ivory Coast on Tuesday.

Samaras’s penalty robbed the African side of the place in the last 16 as they had fought back to level at 1-1 through Wilfried Bony and were in sight of the point they required to go through.

Greece took the lead in the first-half through Andreas Samaris and Samaras’s late winner ensured they accompanied group winners Colombia, who thrashed Japan 4-1, into the knockout stages.

Greece again showed they play best when the odds are stacked against them as they overcame having to replace two key players including goalkeeper Orestis Karlezis inside the first 25 minutes.

A sluggish Ivory Coast side were caught napping on several occasions including one superb sortie by Greek defender Jose Holebas.

He took the ball out from inside his own penalty area, passed to Giorgios Samaras, and then ran onto the veteran former Celtic forward’s pass to let fly with a fierce effort which came crashing back off the bar.

The Greeks, though, got the goal they deserved three minutes from the break as Cheick Tiote’s underhit pass was seized on by the Greeks and it fell to Samaris who fired under the advancing goalkeeper Boubacar Barry.

The 2004 European champions looked conmfortable through most of the second-half with one of the only two players remaining from that side Georgios Karagounis rattling the bar from distance on his 138th appearance for his country.

However, the game turned on its head 16 minutes from time when finally the Elephants put a class move together Salomon Kalou feeding Gervinho, who slipped the ball inside for substitute Wilfried Bony who made no mistake for his second goal of the finals.

Both Karagounis and Ivory Coast icon Didier Drogba were taken off shortly afterwards with the latter receiving a rousing ovation from the almost 60,000 spectators.

However, it was to be the Greek veteran who was to be smiling at the end and looking forward to another big game before he finally hangs up his boots while Drogba bows out.