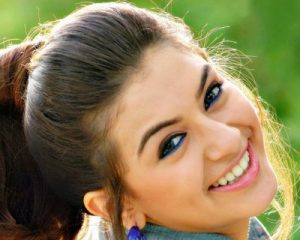 Hansika Motwani the hottest diva of South India has been to Tirupathi for seeking the blessings of Lord Balaji. The actress is high on demand in South though she made her debut in Bollywood. She is very happy since his last film Mappillai have done exceptionally well at the box office.

She came to the temple along with her parents and had the Darshan late in the evening. Hansika after the Darshan has met the media persons and have answered few questions asked by the media. She said that she is presently enjoying the success of Mappillai and also waiting for her release Engeyum Kadhal which is directed by Prabhu Deva. The actress also disclosed that she has four projects in Kollywood and two projects in Telugu in her kitty as of now.

Her film Engeyum Kadhal is all set to hit the screens on May 6th.