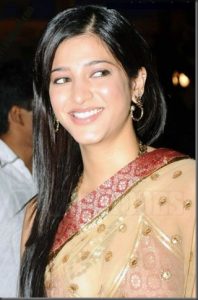 So far we got the news only about Suriya’s role in 7am Arivu but now the character of Shruti is also revealed. Shruti Haasan is essaying the role of a scientist in the film.

Shruti is currently busy with the shoot and the filming of 7am Arivu is going to be wrapped up very soon. Contrary to previous reports which claimed that Suriya is playing triple roles, sources close to the team reveals that Suriya is playing only 2 roles in the film. One of his avatars is as a circus artist and the other as a Buddhist monk in China.

Suriya did homework to play the character of a monk at a monastery in China. It is well known that Suriya always tries for perfection and the same style he applied for this film too. The audio of the film is expected to be out in stores very soon and its is going to be a grand gala where Suriya will be performing all the circus stunts live for his fans.

Ghajini combo is again repeating in 7am Arivu as Suriya- Murugadoss-Harris joined hands once again for this magnum opus.