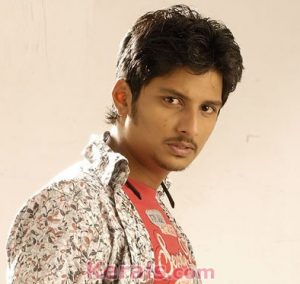 The heading says it all. Today is the birthday of Jiiva, heart-throb of thousands of lovely lasses, son of well-known producer R.B. Chowdary of Super Good Films, and a safe bet for many film producers. Jiiva’s entry to films was as a child artiste. He got introduced as a hero in Aasai Aasayai and Thithikedhe produced under his family banner. His next film Raam with debut director Ameer won him best actor award at the Cyprus International Film Festival. His succeeding releases Dishyum, Aran and E further proved his versatility as a performer. In Katradhu Tamizh, his lonely Prabakar character who gets annoyed at society, even losing his loved one, fetched him great recognition. In Siva Manasula Sakthi Jiiva’s role as a happy-go-lucky-youth was warmly welcomed by all. He is currently busy with Vandaan Vendraan, Singam Puli, K.V. Anand’s Ko, Rowthiram with Shriya Saran and Shakar’s Tamil remake of Bollywood blockbuster 3 Idiots. Jiiva also became the latest to join the dad bandwagon when his wife Supriya gave birth to a boy on October 14, 2010. Just turned 28, this lucky actor finds no time for celebration with his busy film schedules.