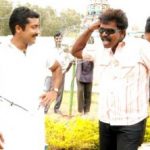 The duo combo Suriya-Hari has already succeeded with flying colors after the hat-trick success of Aaru, Vel and recent release Singam.
The recent buzzes are that they will be back together again for another commercial entertainer. According to the sources it has been revealed that Hari will direct Suriya and the film will go on floors by mid-of-2011.

Hari is now busy shooting for his next film Vengai that has Dhanush and Thamannah in lead roles with Raj Kiran performing a prominent character. Devi Sri Prasad scores music for the film with cinematographer Vetri joining hands with Hari for the first time.

It seems that Suriya after completing A.R. Murugadoss’ Ezham Arivu with Shruthi Haasan will start shooting for his next film to be directed by K.V. Anand. They had earlier worked together for the blockbuster movie Ayan. This untitled film will be a big-budget flick to be produced by Kalpathy S Agoram under the banner name of AGS Entertainments.

By the time, both Hari and Suriya complete their respective project, it will be July 2011 and then it will be the right moment for the duo to start their project. The details about the producers and crewmembers are yet to be confirmed.