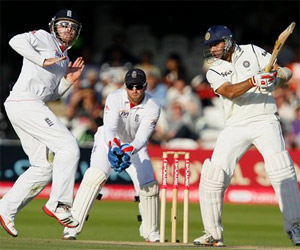 LONDON: A depleted India face an herculean task to save the first Test against England at Lord’s after the hosts set them a record target of 458 runs courtsey Matt Prior and Stuart Broad’s brilliant knocks in an absorbing day’s contest in the 2000th Test.

Prior (103) and Broad (74) pulled England out of trouble with a 162 run stand for the seventh wicket. Ishant Sharma (4-59) had wrecked the England top order reducing them to 62/5 in an incisive spell of fast bowling. England declared their second innings at 269/6.

Set the improbable target 12 overs after tea, India lost Abhinav Mukund (12) before veterans Rahul Dravid (34) and VVS Laxman (32) guided India to 80/1 at stumps in 27 overs. India will have to bat 98 overs to save the Test Monday.

The world record for highest successful chase is 418 by West Indies against Australia in 2003. West Indies have also completed the record chase at Lord’s, 344 in 1984.

But the problem of the World No.1 team is that Gautam Gambhir has joined the injury list with Zaheer Khan and to make matters worse Sachin Tendulkar is fighting viral infection.

Tendulkar did not take the field for the first two sessions which means he can come out to bat only at No.7 or after 4hrs and 18 mins, the time he spent out of the field.

Gambhir hurt his elbow, hit by a Prior shot and had to go for an X-ray that has showed bruising on his left hand.

Zaheer has still not recovered from the hamstring strain he suffered on the first day and did not come out to bowl even in the second innings.

In the face of such adversity, first innings centurion Dravid joined Mukund to open the innings.

Mukund looked solid till he dragged a Broad delivery onto the stumps.

Dravid and Laxman then settled down for a familiar grind. They showed determination, as often they have in their long careers to bail India out of such situations.

England pacers Broad, Chris Tremlett and James Andreson however made it difficult for them getting steep bounce and movement off the pitch. But the two stood solid and stroked some elegant boundaries. Dravid’s backfoot drive off Graeme Swann and Laxman hitting Tremlett for three consecutive fours were the highlight of their 61-run stand.

The start of the day,however, brought hope for India as Ishant, who was wayward in the first innings, found his rhythm.

England, resuming at 5/0 and looking to consolidate their huge first innings lead of 188, were stunned by Ishant’s onslaught.

Ishant’s first wicket of the day was of double centurion Kevin Pietersen, who was surprised with a brute snorter and fended it off awkwardly. The ball brushed his gloves and Dhoni did the rest.

Ishant then dismissed Ian Bell four balls later, forcing the batsmam to edge one to Dhoni.

Jonathan Trott (22) was Ishant’s next victim. The pacer bowled a fuller length delivery that brilliantly cut back to beat Trott’s forward defensive push and crashed through his stumps. At lunch, England were reeling at 72/5.

Mahendra Singh Dhoni would rue for not bringing Ishant starightaway after the 40-minute lunch break. Ishant was brought eight overs later and he struck in his second over, removing Eoin Morgan (19) with a short ball. Morgan was late with the pull shot and the ball carried to Gambhir, who took a diving catch at midwicket.

But Prior and Broad swung the pendulum England’s way. Broad, who has a century against Pakistan here, played some counterattacking shots square off the wicket.

India continued to bowl well, but Prior and Broad took the fight to the opposition. They took the risks and reaped the rewards.

There were two chances that went abegging in the second session, both off Broad. The first was a difficult take for Dhoni off Harbhajan Singh. The second one would have been a regulation catch for the first slip had there been one. But Dravid was standing wide and Dhoni did not attempt a dive off Praveen Kumar.

The two then slammed 95 runs in 12 overs after tea. In all Prior hit five fours and one six while Broad broke the shackles with nine fours.