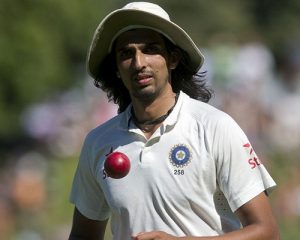 India were on the brink of just their second Test win at Lord’s as Alastair Cook’s latest failure with the bat prolonged the debate about his future as England captain..

England were 105 for four at stumps on Sunday’s fourth day, needing a further 214 runs to reach their victory target of 319. (Won’t Regret Missing Ton if we Win: Vijay)

But the odds were on India going 1-0 up in this five-match series, after last week’s draw at Trent Bridge, and recording their second victory in 17 Tests at Lord’s following their lone win back in 1986.

Joe Root was 14 not out and Moeen Ali 15 not out at the close, the pair having come together after England lost three wickets for two runs in collapsing to 72 for four. (Defending my Game: Jadeja)

Left-handed opener Cook fell for just 22 to make it 27 innings since he had scored the last of his England record 25 hundreds. (Vijay’s 95 Worth a Ton at Lord’s)

His exit came shortly after Ian Bell, the other experienced batsman in England’s top order, had been dismissed for one — his 19th innings without a Test century. (England Players Spooked)

Fast-medium bowler Ishant Sharma removed both Bell and Cook in a burst of two wickets for no runs in seven balls. (Sack Cook as Skipper: Vaughan)

Three quick wickets early in the second session and England would have been on course to end their run of nine Tests without a win.

Jadeja made a dashing 68 while tailender Kumar was last man out for 52 — his third fifty in four innings this series after his Test-best six for 82 in England’s first innings.

His innings saw Kumar join two of cricket’s greatest all-rounders in Ian Botham (England) and Richard Hadlee (New Zealand) as only the third player to have both scored a fifty and taken five wickets in successive Tests.

But Ballance, who made 110 in the first innings, was caught behind off Mohammed Shami to leave England 70 for two.

Bell did not last long, clean bowled off stump by a Sharma delivery that kept a touch low.

Then Cook, after more than two hours at the crease, fell in familiar fashion when Sharma had him pushing out at a good length ball, with wicketkeeper Dhoni taking the catch.

Cook had now scored a mere 115 runs in seven Tests innings at home to Sri Lanka and India so far this season.

Ali, on 11, survived a confident lbw appeal from Jadeja and was dropped of the spinner on 15 when Dhoni failed to grasp a chance under the Lord’s floodlights.

India resumed Sunday in overcast conditions on 169 for four, with opener Murali Vijay 59 not out and Dhoni unbeaten on 12.

After Dhoni fell for a laboured 19, it was not long before James Anderson was bowling to Jadeja, with both players facing a possible ban as a result of their alleged confrontation in the Trent Bridge pavilion last week.

Vijay, in sight of a second hundred of the series following his 146 in Nottingham, fell for 95 when he flicked an Anderson delivery to wicketkeeper Matt Prior after more than six hours at the crease

However, the swashbuckling Jadeja drove both Broad and Anderson back over his head for four while Kumar made England pay for Root dropping him on two before India were eventually bowled out for 342.