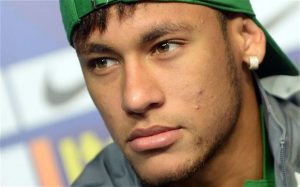 Rio di Janeiro: Brazil starlet Neymar says his team strove hard for World Cup glory, but other countries have moved ahead of them and they must catch up.

In an exclusive interview with Globo television broadcast Sunday, the 22-year-old said he and the team deserved at best seven out of ten for their showing.

Brazil`s campaign came to a shattering conclusion when the hosts saw Germany crush them 7-1 in a lop-sided semi-final.

By then the Barcelona star was forced to watch from his coastal home in Sao Paulo state after he suffered a fractured vertebrae during the quarter-final with Colombia.

In that game, he was clattered in the back by Juan Camilo Zuniga in a “move that had nothing to do with football,” though he accepted the Colombian`s later apology.

Forced onto the sidelines, Neymar said there was no particular reason why Brazil`s campaign suddenly crashed around them.

“There was no particular mistake made by the Selecao. I am not someone who understands a huge amount about tactics,” he said when asked to put his finger on areas where the coaching staff might have rectified matters.

And he refused to blame former coach Luiz Felipe Scolari, Brazil`s 2002 World Cup-winning coach who resigned after the tournament which the Germans went on to win.

“I had a leader (who was) one of the best Brazilians coaches I`ve had,” he retorted, saying there was now little point in stirring over the ashes of the campaign.

Neymar rejected any idea the team could have trained more or been sharper — “we always trained,” he said. “We gave our all.”

He did indicate, however, that the intensity of training in Brazil could be less intense than in Europe.

“You train more, but sometimes you train with less determination. That`s how Brazilians are.”

And he insisted Brazil had to deal with the idea other teams are moving ahead and that his country has no automatic passport to success based on past glories.

“I think Brazilian football is behind. It`s behind Germany and Spain. We`ve slipped behind and we have to be man enough to admit it.”

Brazil on Tuesday is set to appoint former coach Dunga to replace Scolari to prepare for the Selecao`s next tournament, the 2015 Copa America in Chile.