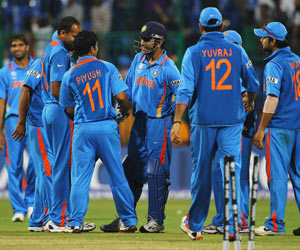 DHAKA: Seemingly miles ahead in quality, particularly in batting, title favourites India will aim to turn the tables on Bangladesh – their nemesis of 2007 – in the inaugural match of the Cricket World Cup here Saturday.

While India could be gearing up for a grudge match before a full house at the 28,000 capacity Sher-e-Bangla Fazlul Haque Stadium, Bangladesh would hope for a replay of their shock victory four years back that virtually sealed the 1983 champion’s fate in the Caribbean.

Head to head, it seems a no contest. The tournament co-hosts have clashed 22 times, with India winning 20 of them. Apart from their 2007 World Cup win, Bangladesh’s only other success came way back in 2004-05 here.

But one-day cricket is known for its unpredictability, and the team that manages to up the ante on a particular day has the last laugh, regardless of the opponent’s reputation.

In what looks like the last World Cup for batting genius Sachin Tendulkar, who is yet to hold aloft the World Cup trophy despite five appearances, Indian skipper Mahendra Singh Dhoni has been careful to guard against complacency.

Notwithstanding his team’s victories in both the World Cup practise matches against four-time champion Australia and New Zealand, Dhoni has maintained that the real challenge lay in replicating the triumphs in the Bangladesh game.

“We have achieved whatever we wanted to and now, we have to replicate the effort in our first match against Bangladesh,” he said.

On paper, India have the world’s most explosive batting line up.

With players of the calibre of Tendulkar, Virender Sehwag, Gautam Gambhir and Dhoni, India would be on song if a couple of them get going.

However, the somewhat lacklustre showing of the middle order in the away series against South Africa recently that India lost 3-2 should serve as a reality check. More so, as it came after the 1-0 win opposite Australia and the 5-0 rout of New Zealand last year.

Young Virat Kohli is tipped to come at number four, with a question mark hanging over Suresh Raina’s place in the eleven.

The dashing Yuvraj is likely to come at number five, followed by Dhoni at six. If Raina is left out, Yusuf Pathan could be seen in action as the number seven batsman.

Pacer Zaheer Khan and off spinner Harbhajan Singh are certainties in the eleven with Piyush Chawla likely to make the cut if Dhoni opts for a double spin attack.

Dhoni has already indicated his preference for four bowlers, with part-time left arm spinner Yuvraj Singh likely to fill the fifth bowler’s slot to give more options to the team management.

Bangladesh, on the other hand, have the advantage of playing in home conditions before a highly partisan crowd at a time when cricket mania in the tiny but populous nation is at an all time high.

Turning out in their fourth straight World Cup since 1999, Bangladesh would be striving to take off from their stunning show in 2007. After accounting for India in the group stage to reach the super eight, Bangladesh scalped formidable South Africa before going out of reckoning.

The bowling, however, has been weakened by the absence of the injured Mashrafe Mortaza, and much would depend on young Shafiul Islam’s success with the new ball alongside Rubel Hossain.

As for the pitch, curator Badiul Alam Khokon has promised an ideal one-day wicket.