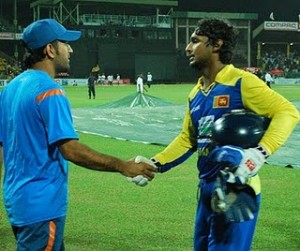 First time in the history of World Cup cricket the hosting nation will be crowned as World Champions. India versus Sri Lanka Final will be remembered not only because its World Cup final but for two great players one who will play his last international game and one who may be playing in his last World Cup.

Both players are greats which will be remembered till the game of Cricket will remain alive because of the contribution both made to the game. One has taken most number of wickets while other has scored most number of runs.

However there can be only one winner whether it’s Tendulkar or Muralitharan only time will tell. But whoever emerge out as World Cup Champion, the legends will remain in the heart of million of fans around the globe for many years to come.

India who start this Final as favorite to lift the trophy knows the Sri Lankans are not an easy team to beat with the players like T.Dilshan, K.Sangakara, L.Malinga and M.Muralitharan in prime form. The top three Sri Lankan batsmen all are in good form with bat but the weakness is in the Sri Lankan middle order which is yet to be tested in this tournament and that is where it gives edge to India over Sri Lanka.

In the bowling department Sri Lanka looks far superior to the Indians, they have the bowlers like Lasith Malinga who can bowl as many Yorkers in death over accurately that is not easy to score.

The key to this game will be the start given by the openers for both teams. Sri Lanka openers just like India are in good form and from my point of view that is where the game will be decided in the Final clash between India and Sri Lanka. Sri Lanka will now heavily depend on Tillakaratane Dilshan, Kumar Sangakara the captain and Mahela Jayawardene if they are to put up or chase down a daunting target.

Both teams know each other very well since they have played as many as 30 games between them since July 2008. Now the world has understood why these two teams played each other so often than not because they knew they have to clash in the largest ICC World Cup Final.

They know each other weaknesses and stronger point so nothing is hidden from any teams, it’s all about handling the pressure and playing freely. If India wins then it will be after long gap of 28 years and if Sri Lanka wins then this will be there second world cup triumph in 15 years.

No team has won a world cup playing their back yard so far but as we have witnessed in last few games, India are not looking back they are raring to go forward and prove every experts wrong.

WilliamHill are also considering India as favorite to win this World Cup 2011. On their website they have given the odds of 4/7 for India and 6/4 for Sri Lanka. However this is game of cricket and you can’t predict the results until last ball is bowled.

The Pitch at Wankhede Stadium, Mumbai is a bouncy wicket which will provide good support to the fast bowler and as the game progresses it will become a slow turner. However according to Pitch Curator it will remain same throughout the 100 overs. But team winning the toss will have an advantage over team chasing if they would put the runs in excess of 275 runs on the board. So team winning the toss is likely to have bat first and put runs on the board.

Likely Playing XI for both teams (Match is schedule to begin at 14:30 PM India Time)

With Ashish Nehra already ruled out of the Final because of injury the toss up for the XI will be between S.Sreesanth and R.Ashwin. By considering the performance of both in this world cup R.Ashwin is likely candidate to replace injured Ashish Nehra

There is also not so good news for Sri Lankan fans with one of there superb middle order all-rounder Angelo Mathews ruled out of the World Cup. Now Thishara Perera is likely to take place of Angelow Mathews while Suraj Randiv who drafted into the squad in last minute before final is likely to take Rangana Herath place.