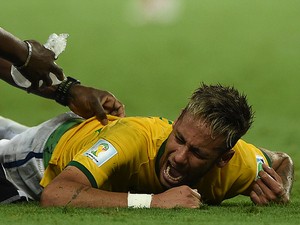 Thiruvananthapuram: Star Brazilian footballer Neymar, who suffered a back injury during his team`s quarter-final win against Colombia in the ongoing FIFA World Cup 2014, may visit Kerala for treatment, reports have claimed.

Reports Tuesday claimed that Neymar may come to the state to undergo ayurveda treatment for his broken vertebrae.

It was also being speculated that the Brazilian Football Federation has contacted Kerala Chief Minister Oommen Chandy with regard to this matter.

The CM has, however, denied that he has been contacted by the Brazilian association.

But Chandy did confirm that his government had been requested by many, including fans in Kerala, to put up a proposal for treating Neymar using ayurveda.

“I spoke to Health Minister VS Sivakumar, who called up leading doctors of the state-run ayurveda college here. They got details of Neymar`s injury through the internet and (were) studying what sort of treatment should be adopted.”

“…we are only going to decide whether to put up a proposal to Neymar whether he wants our treatment,” Chandy added.