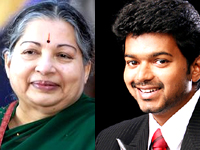 Vijay after his Nagapattinam rally has not made any political statement with penchant. Perhaps he may want to underplay till the elections are over in Tamil Nadu.

But his father SA Chandrasekaran is creating an opportunity for Vijay to stand on the same stage along with AIADMK supremo Jayalalithaa sooner than expected.

SA Chandrasekaran is arranging for a grand audio launch of his film ‘Sattapadi Kutram’ and he is planning to invite Jayalalithaa to release the audio.

‘Sattapadi Kutram’ is said to be a political film launching a scathing attack on present day ruling politics. SAC’s trademark blistering political dialogues in the film are already a talking point for many. Moreover politically and socially conscious actors Sathyaraj and Seeman play important characters in ‘Sattapadi Kutram’.

All those make the SAC film a hot one. Sources say if Jayalalithaa agrees to come for the event then Vijay and director Shankar will receive the first CD from the former chief minister.