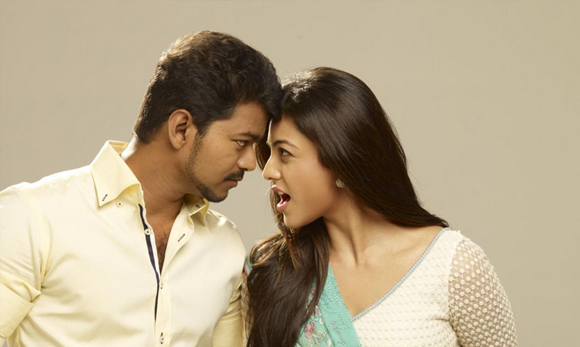 The audio launch of Ilayathalapathy Vijay’s jilla will be held on December 21. D Imman, who has scored the music for the film has tweeted: “Jilla audio from 21st December by Star Music.”

However, like his earlier movies, Vijay’s latest movie will not have a grand audio release function rather it will be a low-key affair. Sources add that the music will be directly released to stores, as the Jilla team has very less time to wrap up the pending works of the forthcoming Kollywood flick.

Sources further say that the Jilla unit is working hard to deliver the product on the promised date. On the other end, the introduction song of the film featuring Vijay and Mohanlal was being shot recently in Pollachi. The track is crooned by SP Balasubramaniam and Shankar Mahadevan.

Jilla will be released for Pongal. The film, which is an action entertainer, will be clashing with Ajith Kumar’s action-thriller Veeram, which is releasing on January 10. The Vijay starrer film features Kajal Aggarwal in the female lead role. While D Imman has composed the music, Natarajan Subramaniam is handling the camera.