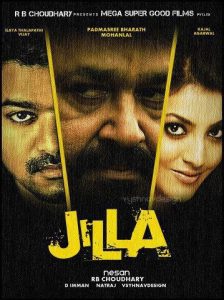 Ilayathalapathy Vijay is all set to make his Malayalam debut through Jilla. This movie has also got Malayalam super star Mohanlal. Jilla will be a Tamil-Malayalam bilingual film under debutant Nesan’s direction.

Mohanlal officially declared about Jilla through a private social networking site. He said, “Hello everyone…There has been a lot of rumors spreading regarding my upcoming projects and i would like to make this clear. I shall be doing a Tamil Movie along with Mr. Vijay scheduled to start by May, But before that i shall be doing a Malayalam Movie, of which the discussions are going on. Other than these two, no other confirmed projects as of now.”

Jilla will also have Kajal Agarwal and Lakshmi Rai as main female leads and Santhanam and Nassar will play their prominent roles. D.Imman has been finalized for music direction and this film is being produced by R.B.Chowdary under Super Good Films.