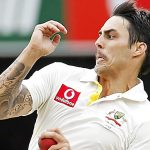 Melbourne: Left-arm fast bowler Mitchell Johnson is set to be recalled for the third Ashes Test against England to be played in Perth next week, while New South Wales quick Doug Bollinger is likely to be axed after Ryan Harris was cleared of a chest muscle injury.

According to the Daily Telegraph, Johnson’s return appears inevitable after he was told to rest from the Sheffield Shield match between Western Australia and Queensland, beginning in Brisbane on Friday.

Harris was Australia’s best bowler in the innings defeat to England in the second Test.

“He is expected to be available for selection in for the third Test in Perth,” Australia physiotherapist Alex Kountouris said, describing Harris’s injury as minor.

Bollinger’s lack of fitness looks set to cost him a place after skipper Ponting claimed the left-arm speedster “hit the wall” during two days of bowling under the hot Adelaide sun.

Ben Hilfenhaus also looks certain to return with his ability to bowl consistent outswing into the Fremantle doctor.

However, the batting remains a conundrum, with Usman Khawaja scoring another nice half-century for NSW, but failing to nail the big score which would make him a red-hot chance to replace Marcus North.

An opening batsman is required to replace Simon Katich, with Shaun Marsh emerging in a very bare frame given such a poor start to the season by Phil Hughes.

Marsh has opened the batting for Australia in one-day cricket and looks WA’s best batsman among a modest lot.

Nathan Hauritz continues to put his name forward, scoring a century for NSW on Wednesday after bowling his state to victory in the previous Shield match with career-best figures of 5-39. (ANI