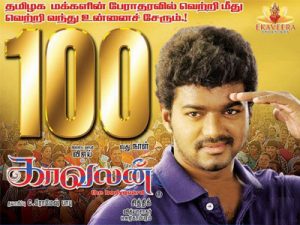 Ilayathalapathy Vijay’s Pongal release Kaavalan has completed 100 days of theatrical run. The film got release on 15, January, 2011 and has successfully completed the century run even by facing tough competition.

Kaavalan is directed by Siddique and produced by Ramesh Babu under Ekaveera Creations Banner. Asin played Vijay’s ladylove in the film. Vijay is back with his ever cool boy image after a long time and this made the family audiences to rush to theaters. Vijay has seen slew of failures before Kaavalan, thanks to the director for getting back Vijay on track with Kaavalan. The film was released in India with nearly 350 prints on January 15th and has set the box office on fire by making record collections in Chennai.

Kaavalan Box office collection reports have proved Vijay’s mass image and as per trade buffs Kaavalan has taken a mega opening. The film’s budget is Rs 18 crore and has made gross revenue of Rs 35 crore.

Kaavalan is the remake of Malayalam hit Bodyguard, was directed by Siddique.