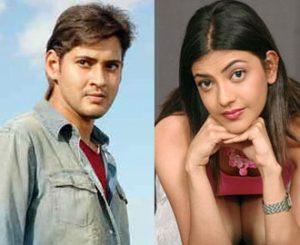 After scoring a hattrick of hits, Kajal Agarwal has turned out to be one of the reigning stars of Tollywood, also becoming lucky mascot for many Top heroes and film-makers. Apart from this, the actress has grown as an actress with every film, impressing the audience with her looks and performance in equal proportions.

The latest offer in Kajal’s kitty is The Business Man starring Mahesh Babu in the lead and Puri Jagannadh as its director. This is the first time Mahesh and Kajal are pairing up and the director opines the duo forms a good on-screen couple. The Business Man is a story set in Mafia backdrop, with an interesting tagline Guns don’t need agreements. This R.R Movie Makers production venture will start rolling its camera from the month of July.

Other than this, Kajal Agarwal is part of Ravi Teja’s Veera and is also being considered for the leading lady role in Pawan Kalyan’s Gabbar Singh. She is also casting opposite Ajay Devagan for a Bollywood project, the remake of Kollywood movie Suriya’s Singam. The movie marks her entry in Bollywood. Way 2 go Kajal!!!