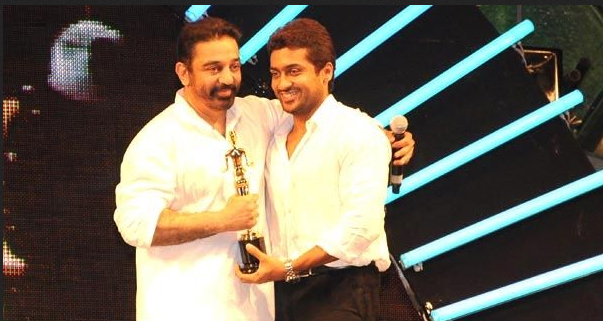 Kamal Haasan has reportedly asked Suriya to take up one of the important roles in his first Hollywood venture.

Suriya and Kamal has earlier shared screen space for KS Ravikumar directed Trisha starred ‘Manmadhan Ambu’ and the duo seem to have shared a great rapport. Latest we hear is Suriya will be foraying into Hollywood along with Kamal Haasan in the production of Barrie Osborne banner, who is keen to do an English movie with Ulaganayagan.

Meawhile Kamal Haasan is busy wrapping up the post-production works of his magnum opus Viswaroopam and Suriya is busy with KV Anand directing Maatran with Kajal Agarwal. Suriya also has Gautham Menon’s Thuppariyum Anandhan and Hari directing Singam2 in his kitty. If everything falls in the right place Suriya and Kamal will be entertaining fans sharing the screen space soon.