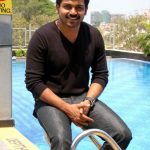 Karthi Sivakumar is one actor who never fails to appreciate teh talent. The super actor son is still basking in the success of his recent release Naan Mahaan Alla.

The actor who found some time off to watch his friend Arya’s latest movie Boss Engira Baskaran. Karthi was all praises fot Arya’s acting and was so impressed that he watched the movie second time.

Karthi said that he learnt a lot from Arya as he’s been watching Arya closely since Ullam Ketkume days. Doesn’t that sound like real Nanbenda!!