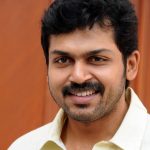 Many top directors and production houses were fighting for Karthi’s call sheet to do his next film after the super hit Siruthai.However, Karthi has sprung a surprise, he has decided to do a film with a debutant director Shankar Dayal.Who is Shankar Dayal? He is a former associate of Ezhil, and he has come out with a script that impressed Karthi.

The star who has been hearing story narrations from some leading directors, finally zeroed in on Dayal’s script which is “fresh innovative and within the commercial format”.

The untitled film will be produced under his home banner Studio Green of Gnanavel Raja, and the shoot will start from April second week. A photo shoot will take place in the next couple of days.

Who will play heroine opposite Kollywood’s fastest rising star? As per the grapevine, Tapasee is the frontrunner at the moment, though some others are also being considered. GV prakash is likely to be the music director.

The other details are being worked out.