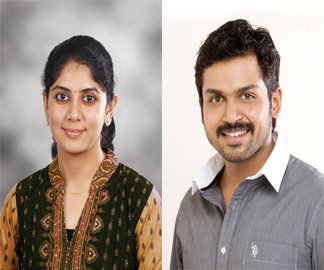 There is always a mandatory “meet the press” for all stars before their marriage. It is a sort of “bachelor party” for all male stars when they bond with media.

And our rising superstar Karthi wooed the media today (June 26) afternoon by holding a press meet where he handed over invitations to the media personally followed by a sumptuous lunch at a luxury hotel.

Karthi in his brief speech said that it was an informal meet with the media to invite them and hand over the invitations personally. He said: “I would have loved to bring Ranjini here but she will be scared to see so many people from the media, as she is a non-filmi person”.

Later speaking to sify.com, Karthi said: “I always wanted to marry a girl out of the industry and I am so glad that I found Ranjini, who understands me and my profession. She is a normal, simple girl and I am looking forward to a perfect married life”.

On what he gifted Ranjini after their engagement Karthi said: “It was an i- phone which was useful for me too, as I wanted to chat and talk to her everyday”.

The Karthi invitation to the media is only for the wedding reception at a five star hotel in Chennai on July 7. The actor’s marriage is to take place at Coimbatore on July 3.

1 thought on “Karthi invites media for his wedding”