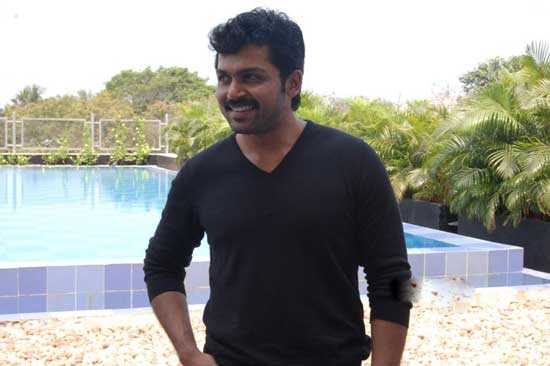 Kollywood young rising star Karthi who is soon entering wed-lock is currently switching all his energies for his forthcoming film Saguni.

Saguni is a political satire film directed by debutant director Shankar Dayal. It was earlier known that Shriya Saran is playing the female lead opposite Karthi but now it is known that the director is on the look-out for a brand new face, as heroine, apart from which she should be fluent in Tamil as the character is designed in such a manner. The hunt is almost on the heels of completion and an official announcement will be made soon.

Karthi is going to be back with comedian Santhanam to create the laughter magic yet again on screen after Siruthai.

Meanwhile Karthi is seen busy with his mobile during the breaks in shoot as he engages himself in conversations with his fiancé, Ranjani.