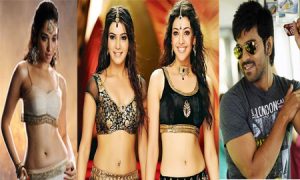 It is well-aware that Ram Charan has signed up 3 back-to-back films and the Mega Power Star will soon get busy with all these big-banner projects. Ram Charan is all set to romance the three hottest and the current sensations of Tollywood Tamannah, Samantha and Kajal Agarwal in these three upcoming films.

His immediate film Racha with director Sampath Nandi will have Tamannah as the leading lady. Tamannah has made a great comeback in 100% Love, who earned marks for her looks as well as for her performance. Racha will kick-start its shoot from 18th June.

Next to Racha, Ram Charan will act in V.V.Vinayak’s direction which is touted as a high voltage mass film with all commercial elements. Samantha has been roped in as the female lead in the film. Post ye Maya Chesave and Brindavanam, Samantha has earned huge fan base in Tollywood. The actress is happy to be part of this Danaiah production venture.

Ram Charan will once again pair with his Magadheera lady Kajal Agarwal in his next flick with director Vamsi Paidipalli. The pair has rocked the screens with their on-screen chemistry in Magadheera and are hoping to repeat the magic once again.