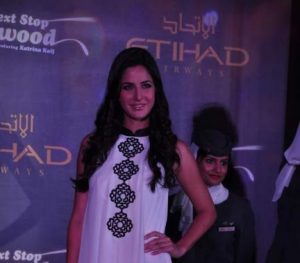 Katrina, announced the winners of the Next Stop Bollywood Dance Competition at the Etihad Airways press conference held at the Taj Palace in Colaba, Mumbai.
Katrina Kaif talked about the prospects judging a reality dance competition at the event, disclosing that though it is something she would like to do one day, it’s not something she has thought about yet. But for this online contest, Katrina selected the three finalist and the eventual winner.

“I have not given much thought about judging reality dance competitions. But given time and space, I might sit on the judge’s chair,” said Katrina.

The First prize in the Next Stop Bollywood Dance competition was won by Serge Ramahenintsoa from France. His prize was a lunch with Katrina, two Perl Business Class tickets to Mumbai, five nights in a luxury hotel and a cash prize of USD 50,000. The second prize went to Litty Wilson from Kuwait and Chaya Fernando from Sri Lanka took the third prize.

Katrina Kaif said, “You need a combination of confidence, sense of rhythm, ability to emote and passion to be a good dancer.”