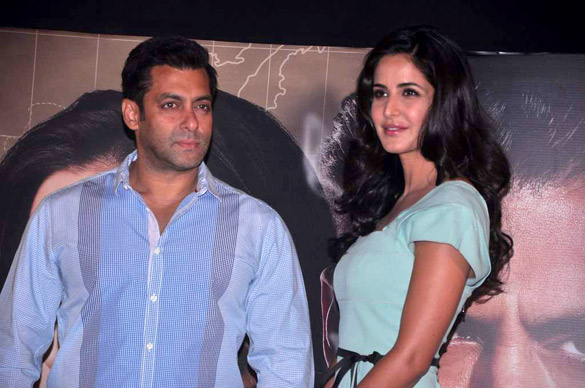 We recently heard that Superstar Salman Khan broke all ties with his ex-girlfriend Katrina Kaif. Reports had said that she has moved on with her rumoured boyfriend Ranbir Kapoor. However, on the occasion of Ganesh visarjan, we spotted Katrina Kaif in Salman Khan’s sister Alvira’s home. So it does not seem to us that all ties between the former couple are broken. This festive season we might have seen quite have seen quite a few broken relationships being mend.

It looks like Salman Khan and Katrina Kaif may remain friends. It’s more like lovers turn friends. On this special occasion at Alvira’s home, we even spotted another Salman’s ex girlfriend named Sangeeta Bijlani. We see that Salman Khan tries to maintain the friendship that he once he had with his former girlfriends. Katrina Kaif looked pleased to meet the Khan family after a long time. The big family have been together for Ganesh Chaturthi celebrations and taking blessings from Lord Ganesh.

Katrina Kaif attending the visarjan came to us as a big surprise but everyone seemed happy to see her. The visarjan was also attended by Sonakshi Sinha and the piictures show that she was full of energy at the event. Few others who came to celebrate the visarjan with the Khans are Prateik Babbar, Ashmit Patel, Karanvir Bohra with wife Teejay, Sophie Choudhary and Ritu Jain. Have a look at the slide show to see Katrina and others at the Ganesh visarjan.