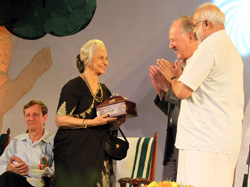 “Malayalam Film Industry is very lucky to have many talented actors and filmmakers”, said Waheeda Rahman.

She was addressing a meet the press in Trivandrum in connection with the festival. She also added that it was a great honour to have been invited to the festival, which has over the years emerged as one of the premier cultural events of the country.

Many film personalities from Malayalam industry like T.V.Chandran,Ranjith, Laljose, are also busy with the festival. Achuthanandan said the festival would be an opportunity for the film lovers, directors and artistes to get themselves familiarised with the latest trends in world cinema.

Films of German master Werner Herzog, who was honoured for lifetime achievement at the inaugural function and RainerWerner Fassbinder will be attractions at the festival.