You know you are in for some agony when:

. ‘You Punjabi’ and ‘You Madrasi’ are hurled like abuses.

. Men and women refer to each other as ‘idlis’ and ‘samosas’.

. Even jeeps and bikes become a part of this North versus South lunacy.

. Middle-aged men of repute break into a Macarena with tribal folk in a jungle.

. Two silly teenagers elope into the jungle only to suffer from occasional pangs of conscience.

. The villain has a barrel full of kohl smudged on his face.

Khanna & Iyer is so obnoxious, it pretty much leaves you with impaired senses. The real purpose of this idiocy is to launch the career of two talent hunt winners � Sarwar Ahuja and Aditi Sharma. There was a time when such competitions were trusted to produce actors like Rajesh Khanna and, more recently, Arshad Warsi. In that sense, this Zee Telefilms-Mukta Arts collaboration doesn’t showcase Ahuja and Sharma to the best of their abilities.

First-time director Hemant Hedge does a rather hotchpotch job of a script that is old enough to be in a museum. The same old parental opposition leads to Khanna and Iyer’s respective teenage son and daughter — Aryan and Nandini — running away from home. Since Khanna (Manoj Pahwa) is a prosperous businessman and Iyer (Mushtaq Khan), a well-known politician, the report of their kids absconding spreads like wildfire on ‘Breaking News’-hungry channels.

Considering what constitutes national news these days, this part of the film is fairly easy to digest. But the words ‘low budget’ are written so prominently into the film, that neither Khanna nor Iyer can fob off the ‘affluent’ tag.

That is the least of Khanna & Iyer‘s problems. The plot is so foolishly convoluted, for one. While on the run, some goon hides a confidential CD inside Nandini’s backpack. Now, a whole bunch of buffoons are after that bag � blundering cops, a sickly goon, growling terrorists and a swindling forest officer. Khanna and Iyer have also set out in search of their kids. A few miles behind are their respective wives and sidekicks. 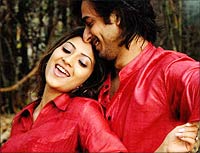 And yes, all that ensues is supposed to be funny!

Caricatures reach an altogether unheard-of level in this ceaseless, careless, crude verbal combat between the Punjabi and the Tamilian. With every passing frame, the movie gets noisier, crazier and impossible to bear. Despite some spontaneous effort from Pahwa and Khan, the humour is essentially flat. You smile out of respect for these genuinely worthwhile actors, but the laughter doesn’t come so cheap.

Yashpal Sharma as the fearsome Donga � with his demonic cackle � is a guidebook on hamming. Ditto for the supporting cast, who go over the top to collectively demonstrate the evil side of acting. Newcomer Sarwar Ahuja is decent at action but has dull screen presence. He needs to infuse a lot more dynamism towards his art and personality to get noticed. His leading lady Aditi Sharma fares better. With a little more effort and polish, this expressive beauty could do better.

Without beating abound the bush, Khanna & Iyer is, at best, a tribute to utter stupidity. It has no story, no romance, no fun, and no reason for being.