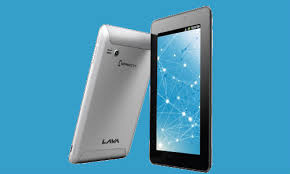 Lava is an old player for budget phone and tablets company offer large no. of products now Lava launched Lava Z7C tablet with 3G caling. Lava Z7C+ features a 7.0-inch capacitive WVGA display with a resolution of 800×480 pixels. Under the hood is a 1GHz Qualcomm Snapdragon processor with 512MB RAM, which, if compared to the current lot of tablets launched in India, can be called a bit under-powered in terms of hardware.

The Z7C+ runs on Android 4.0 Ice Cream Sandwich operating system, which, again, is outdated. There is a 2.0-megapixel camera accompanied by a VGA front camera. The highlight of the device is it comes with SIM card slot and supports 3G calling. Other connectivity features include Wi-Fi, Bluetooth, GPRS, EDGE and 3G. The internal storage capacity stands at 4GB which can be expandable up to 32GB via a microSD.

Tablets with voice calling support have gained popularity off late with a number of manufacturers like Micromax, Intex, iBall, Penta releasing tablets with SIM support.

Lava has been an old player in the budget phone segment where the company has a large number of products to offer. Recently, Lava has been quiet busy with the launch of its Iris smartphone, Lava Iris 504Q with gestures control in India. The company’s latest launch, Xolo Play T1000 boasts off a NVIDIA Tegra 3 processor.