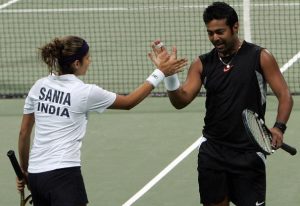 Finally, the monkey is off the back of the Indian contingent with Gagan Narang winning a bronze medal in the 10m air rifle event.

The fact that Narang fired 10.7 with his last shot in the close final to finish third proved that he is a champion.

Narang’s medal should come as a boost for the rest of the Indian athletes who would be pumped up in the coming days.

Coming to tennis, the mixed doubles draw is out and Paes and Sania Mirza will have their task cut out as they face Serbian Ana Ivanovic and Nenad Zimonjic.

Zimonjic is a good doubles player but lacks consistency and the Indians would hope that he has a bad day.

It was heartening to see that both our doubles combinations (Mahesh Bhupathi-Rohan Bopanna and Leander Paes-Vishnu Vardhan) won their first round matches.

Bhupathi and Bopanna were up against a strong pair from Belarus – Maxi Mirnyi, who is ranked no.1, and Alexander Bury.

There were no breaks of serve until the 13th game of the deciding set when Bhupathi made two impressive returns. Bopanna then did well to serve out the match.

However, it was disappointing to see them go down in straight sets to Frenchmen Julien Benneteau and Richard Gasquet in the second round.

It was also an impressive performance by Paes and Vishnu considering that the latter was playing his first match at this level. They were up against the scratch Dutch combination of Robin Haase and Jean-Julien Rojer, who came together for the Olympics.

Vishnu lost in the singles, but that experience helped him prepare for the doubles encounter. He could get used to the conditions, the surface and the crowd which would have taken care of the nervous energy of playing in his maiden Olympics.

They have a tough prequarter-final against Frenchmen Jo-Wilfried Tsonga and Michael Llodra, both of whom are accomplished doubles players.