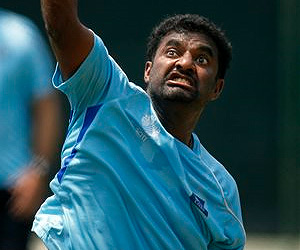 COLOMBO: Muttiah Muralitharan has recovered from a hamstring injury and is fit to play for Sri Lanka in Saturday’s World Cup quarterfinal against England.

“Murli is fine to play,” captain Kumar Sangakkara said Friday. “He is 100 percent OK, which is great for us.”

Muralitharan, the leading wicket-taker in both test matches and ODIs, pulled his hamstring when he dived while batting during the last group match against New Zealand last week.

It didn’t hold him back in that match — he returned to take four wickets.

Muralitharan has already announced his retirement from international cricket after the tournament and has so far taken 11 wickets in six 2011 World Cup matches with an average of 14.18.

“He’s a guy who rises to occasions and does really well in big games,” Sangakkara said. “The side is very confident about what he can produce for us in important games and that’s exactly the way we are going to look at it.”

Sri Lanka will surely start as favorite to book semifinal berth against an England side which has performed in patches in the group stage.

Injuries to three players and depression to Michael Yardy has meant England needed to draft in at least four replacements, which has made things difficult for captain Andrew Strauss to form a settled combination.

But victories against South Africa and a high-scoring tie against India has made Sangakkara wary of England team, which lost to weaker sides Ireland and Bangladesh in group matches.

“I don’t think they will be worrying too much about players who have left them but rather think about who they have and how to play well with those players.”

Sri Lanka had fielded all its three specialist spinners — Muralitharan, Ajantha Mendis and leftarm spinner Rangana Herath — at the re-laid pitches of R. Premadasa Stadium when they met Australia in the group match which was washed out due to rain. They didn’t bowl a ball in that match.

Spinners generally play a significant role on the slow subcontinent pitches. Pakistan had used the spin ploy successfully by opening up the bowling against Australia and the West Indies with its slow bowlers.

“Spin seems to have come to the fore and it’s been a new lifeline,” Sangakkara said. “All the sides now have pretty good spinners … they’ll all try and pick up the players who they think can do the job.”

However, Sangakkara kept his cards close to his chest as to whether he would field all his three spinners against England.

The supreme form of Sri Lanka’s top order batsmen had hardly tested the lower order of co-host in group matches with Sangakkara, his deputy Mahela Jayawardene and openers Tillakaratne Dilshan and Upul Tharanga all smashing centuries.

Sangakkara insisted his middle order batsmen Chamara Silva, Chamara Kapugedera and Thilan Samaraweera are among the best batsmen in the world.

“They are the best players we have in Sri Lanka and some of them are equal to the best players in the world,” he said. “It’s hard to judge the middle-order when they only got to bat 5-10 overs in games.”

Sangakkara dismissed the notion that England had nothing to lose and all pressure will be on his side to do well in front of a packed house of 35,000 home fans.

“It depends what you lose is a semifinals berth,” he said. “I don’t think any side wants to lose … all sides feel that intensity and pressure equally.”