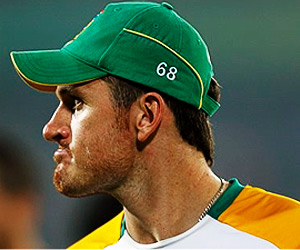 DHAKA: Captain Graeme Smith prepared himself for verbal “daggers and swords” to be directed at his South African squad after an all too familiar defeat in the World Cup knockout stage on Friday.

Smith’s eight-year tenure as limited-overs captain ended in ignominy with a 49-run quarterfinal loss to New Zealand in a match his side had complete control of at 108-2, chasing 222.

South Africa has failed to win a World Cup knockout match in five attempts, stretching back to its debut in the tournament in 1992.

“There’s nothing I can say right now that’ll make the fans feel better,” said Smith, whose team was one of the top contenders for the title. “We feel terrible. We’ve given our best and today we let ourselves down and we let a lot of people down. There’s no excuses for that.

“When the team goes home there’s going to be daggers and swords thrown and whatever, there’s a group of 25 people here that have just got to take it on the chin.”

South Africa gained a reputation as “chokers” with knockout round losses in four of the five World Cups it had competed in, despite being the form team on several occasions.

History repeated itself on Friday when South Africa was beaten by a New Zealand lineup that looked down and out when Jacques Kallis and AB de Villiers took the Proteas past the 100 mark for the loss of two wickets.

Smith said it was “hard to describe” his emotions, and blamed the collapse on a lack of composure at key moments.

“It’s kind of disbelief really,” he said. “I thought we certainly had what it took to be able to win today, and unfortunately we didn’t. New Zealand performed better than us on the day.

“I still thought 220 was a reasonable target to chase and at 100-2 we were right in the game. Apart from a crazy five overs, we played some decent cricket but not good enough again.”

The result means Smith ends his captaincy of the one-day team without adding the ICC silverware South Africa craves. He will retire from limited-overs internationals altogether, and it appears unlikely that the 35-year-old Kallis will have another chance to win a World Cup.

Kallis, one of the world’s great allrounders, has been to five World Cups, and come back disappointed on every occasion.

“It’s been going on since 1992, we’re not the only World Cup team that hasn’t gone on to win,” Smith said. “There are a lot of teams and players that have come before us and hopefully in the future, the players who get the opportunity will hopefully go all the way.

“It’d be nice if some time in the future South Africa won a World Cup, that’d be terrific. With the type of players we’ve had, we deserve it somewhere.”

Smith, 30, plans to continue as test captain but after eight years as skipper in both tests and ODIs, Smith said the pressure of the job had taken its toll.

“I feel like I’ve still got a lot to offer South African cricket,” he said. “I haven’t performed at my best in this World Cup so I’d like to take some time away now and go and work on a few things and come back stronger.

“I’m very proud of my record and what I’ve been able to achieve as South African captain through those eight years and in a job that I think is pressurized.”

“South African cricket is in a really exciting period. It’s tough to say that, but there are a lot of positives,” he said, before adding: “But right now, it’s doom and gloom I guess.”