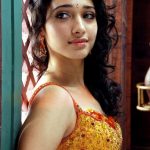 Tamanna, who has been hugely successful in Tamil cinema, is yet to get the foot hold in Tollywood, her favorite destination. Despite having a sensational hit, Happy Days to her credit, Tamannah failed to make it get counted. After a brief hiatus in Tollywood, Tamannah is back again with Sukumar directed Naga Chaitanya film. In this film she is playing the role of a naughty college student. Tamanna is expecting Sukumar to change her fortunes in Telugu film industry. Already the new look given to her in this film is catching attention of many an eye. Sukumar is known for making films that appeal to youth and Tamanna is wishing that his magic spell casts upon her to get closer to the Telugu audience. She has a back up film in the form of Badrinath and Tamanna is praying for the success of Sukumar’s film, which marks her re entry in Tollywood. Good luck Tamanna.