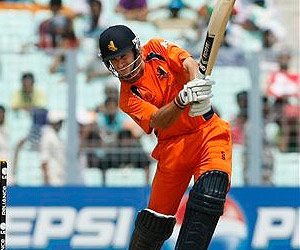 KOLKATA: Ryan ten Doeschate struck a fluent century Friday to help the Netherlands reach 306 in 50 overs against Ireland in their World Cup Group B match.

The 30-year-old batsman struck 106 off 108 balls with 13 fours and a six, in what was his second century in this World Cup and fifth in limited-overs internationals.

Captain Peter Borren struck 84 and Wesley Baressi made 44 after Netherlands were sent in to bat, scoring quickly until a bizarre sequence of four runouts on the last four balls of the innings.

Ten Doeschate, for whom this will be the home ground when he joins the Kolkata Knight Riders for the Indian Premier League next month, continued the fine form that has netted him scores of 119 against England and 53 not out against the Bangladesh earlier in the tournament.

He became the third batsman to notch two centuries in this World Cup after Sachin Tendulkar of India and South African AB de Villiers, helping his team record its best total of the tournament.

Ten Doeschate shared a solid 121-run stand for the fifth wicket with Borren, who pushed up the run rate later in the innings with an 82-ball knock, and 60 with opener Barresi.

Barresi, who retired hurt on two after being hit on the back of his head by a throw from the deep, returned to strike four boundaries and two sixes before being trapped lbw by off-spinner Paul Stirling.

Opener Eric Szwarczynski was caught behind off Trent Johnston, while Tom Cooper gave an easy catch to Porterfield off other pace bowler Boyd Rankin as the score was 12-2 in the third over.

Alexei Kervezee was also out when he seemed to be settling in well with a score of 12. But a pre-determined shot from him went straight to Kevin O’Brien at extra-cover to give allrounder John Mooney a wicket.

Ireland missed the services of left-arm spinner George Dockrell for most of the innings after he injured his shoulder fielding in the fourth over.

Ireland and the Netherlands are already out of contention for the knockout stage.

Ireland has one win in its first five games while the Netherlands is winless.