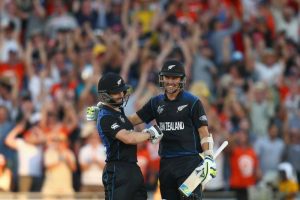 New Zealand has prevailed in one of the greatest ever World Cup matches, holding off the late surge of Australia’s bowlers to win by one wicket at Eden Park.

In a low-scoring match that went right down to the wire, the nervous Kiwis huffed and puffed to victory after man of the match pacer Trent Boult’s career-best five-wicket haul had helped bowl out the Aussies for 151 in 32.2 overs at a packed Eden Park.