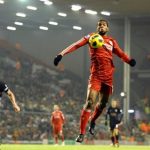 Liverpool ensured there would be no happy return for former manager Gerard Houllier as they beat the Frenchman’s Aston Villa side 3-0 in the Premier League.Two goals in the space of three first-half minutes from David Ngog and Ryan Babel all but settled the match in Liverpool’s favour before Maxi Rodriguez added a third 10 minutes into the second half.

Victory saw Liverpool move up into eighth place in the table, 10 points behind leaders Arsenal.

For Villa, defeat meant the Midlands club remained just two points above the relegation zone and Houllier said going behind so early in the match had been a shattering blow to his team.

“I cannot fault the players for the effort, they tried hard.”

“When you concede a goal after 12, 13 minutes at Anfield it’s hard to come back. It’s a shame because I thought we could have done something here today.”

And the Frenchman added Villa’s league position was a worry, saying: “We are concerned. The players and the staff have to take things in our hands.”

But for Liverpool manager Roy Hodgson this victory was a sign of his side’s progress after a dreadful start to the season.

“I think we shot ourselves in the foot early doors so we’re still limping but the limp’s getting better every game.”

Ngog opened the scoring with his eighth of the season with 13 minutes gone and Babel, who was making his first Premier League start of the season, added a second with his first league goal of the campaign.

Rodriguez finished off a fine break for Liverpool’s third goal but Villa?s resistance had long been broken.

The result meant Villa had won just once in their last 10 league games and left the 63-year-old Houllier, who led Liverpool to FA Cup, UEFA Cup and two League Cup triumphs during six years in charge at Anfield between 1998 and 2004, with a major rebuilding job on his hands.

And this loss would have been made worse for former France boss Houllier, who underwent heart surgery while in charge at Anfield, by the knowledge that the Merseysiders were without three key players.

Liverpool captain Steven Gerrard and veteran defender Jamie Carragher were both injured while star striker Fernando Torres pulled out when his wife, who is expecting their second child, went into labour earlier on Monday.

Liverpool were first to threaten when Villa failed to clear a Raul Meireles free-kick and Dirk Kuyt failed to get his shot on target.

And they took the lead when, from a Meireles corner, Martin Skrtel rose highest to flick the ball on and Ngog thumped a header past former Liverpool goalkeeper Brad Friedel.

Two minutes later the lead was doubled when Lucas clipped the ball over the top and Babel beat Stephen Warnock to the ball and guided a shot into the corner.

And Sotirios Kyrgiakos could have made it three when he headed wide from another well-delivered Meireles free kick.

Villa showed signs of life after the restart, with Stewart Downing sending in a cross that picked out Gabriel Agbonlahor only for the striker’s shot to be blocked by the onrushing Pepe Reina in what turned out to be the goalkeeper’s 100th Liverpool clean sheet.

However, Liverpool made it three in the 55th minute with a fine move that started with Reina rolling the ball out to Rodriguez.

He knocked the ball right to Ngog, who returned the ball for the Argentina midfielder to guide a shot into the top corner.