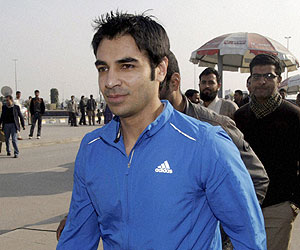 KARACHI: Pakistan cricketers and officials have reservations about using lie-detector tests to curb corruption in the game. Banned former captain Salman Butt even called the idea a “mockery” that could ruin players’ careers.

The Marylebone Cricket Club (MCC), the guardian of the rules of cricket, recently floated the idea, saying that lie detectors had the potential to fight corruption in cricket, and stressed that the proposal should be widely debated.

Former Australia captain Steve Waugh, who is a member of the MCC, even took a lie-detector test himself as part of his bid to help root corruption out of cricket. Waugh termed the test a nerve-wracking experience.

Butt, who is facing a criminal case in a London court following a minimum five-year ban by the International Cricket Council (ICC) in the spot-fixing scandal during England tour, rejected the idea.

“It’s a non-serious proposal, in fact it’s a mockery,” Butt told the Express Tribune Friday. “If a machine is going to detect corruption, then all corruption-related issues would’ve been resolved. What’s the use of investigative agencies then?”

Butt doubted the accuracy of lie detectors and stressed that the mere idea was “against the concept of right and wrong”.

“It’s about the lives of cricketers. Machines cannot announce verdicts on a player’s career. It seems Waugh is working as an advertising agent for some lie-detector company,” Butt said.

Former Test cricketer Basit Ali, who has been vocal against corruption in the past, gave a conditional thumbs-up to the MCC’s proposal.

“If it’s hundred per cent accurate, then only should it be used,” said Basit. “As far as I know, there are doubts over its accuracy and there’s always a minimal doubt over its results so the use of lie detectors should be discouraged.”

The Pakistan Cricket Board’s (PCB) legal adviser Tafazzul Rizvi, expressing his doubts over the accuracy of the test, felt the implementation of the plan will be an uphill task.

“It’s not hundred per cent accurate,” said Rizvi. “There should be a thorough experimentation of lie detectors before implementing the proposal. However, it still wouldn’t be easy to implement it because it will require amending the laws of ICC’s member countries. In Pakistan, no one can be forced to give evidence against himself.”

The MCC’s proposal has not only been panned by Pakistan cricket circles but also by the Federation of International Cricketers’ Association (FICA), which has rejected it.

“It is FICA’s strong position that the use of lie detectors as a means of determining the guilt or innocence of a player in matters relating to corruption or on any practice for that matter, is to be rejected outright,” FICA chief executive Tim May said in a statement.

“The lie detector tests are far from foolproof and not permissible as a means of determining people’s guilt or innocence in the courts of the majority, if not all, cricketing territories.”