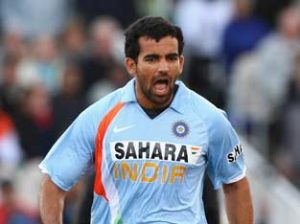 LONDON: India’s pace spearhead Zaheer Khan could miss most part of the four-match Test series as he suffered hamstring pull on the first day of the 100th Test against England at Lord’s here Thursday.

Zaheer, who was the most impressive bowler, pulled up half way through his 14th over and limped off the field and did not reappear, leaving India captain Mahendra Singh Dhoni with just three front-line bowlers.

If a hamstring tear is diagnosed, Zaheer will need at least two weeks’ rest and that would rule him out of the entire series. Zaheer had also missed the West Indies series due to an ankle injury.

“It is always difficult for a batsman on a wicket like that but Zaheer is really a clever bowler. Having chatted to him about his thoughts on how he bowls you see that he is a quality bowler and he showed it here. Zaheer bowled very well and him going off was a big blow. If he had stayed on he could have got us that third wicket, so it was a big loss for us,” said Fletcher.

Zaheer’s absence will be big bonus for the England batsmen, who found it difficult to handle and the left-arm pacer expectedly picked up England captain Andrew Strauss and his opening partner Alastair Cook.

Zaheer career has been plagued with injuries and he spent nearly two years to overcome a hamstring problem suffered on a tour of Australia in 2003.